Can food affect your mood? 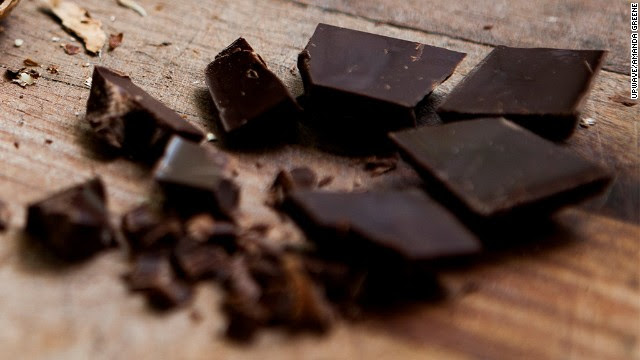 Chocolate is a known mood booster, as cocoa raises serotonin levels in the brain.
STORY HIGHLIGHTS
Editor's note: upwave is 's new lifestyle brand designed to entertain the health into you! Visit upwave.com for more information and follow upwave on Twitter, Facebook, YouTube,Pinterest and  @upwave.
(upwave) -- The rumor: Chocolate -- and other edible goodies -- can boost your mood
As a piece of chocolate melts on your tongue, you can literally feel stress leave you and bliss greet you. But is it just a trick of the mind? And what about other foods? Can they help (or harm) your mood?
The verdict: Certain foods can stimulate the happy-making parts of your brain. And other foods have the opposite effect
It's not your imagination: Chocolate is a known joy stimulant. According to a study published in the Journal of Psychopharmacology, those who drank a polyphenol-rich chocolate drink once daily (the equivalent of 1.5 ounces of dark chocolate) reported feeling calmer and more content than those who did not.
upwave: Get your fix: Chocolate stressbuster smoothie
"Cocoa boosts brain serotonin," says ethnobotanist Chris "The Medicine Hunter" Kilham, who has traveled the world in search of traditional, plant-based medicines. "Almost every single antidepressant aims at either enhancing serotonin or keeping it in the brain longer. Chocolate or cocoa does that very well."
So if you're craving chocolate, what you could really be craving isn't something sweet, but something to make you smile.
"A lot of people self-medicate with chocolate," says Kilham. "Women do that prior to and during menstruation, when brain serotonin goes down. Chocolate will help to boost that back up. And a lot of people just plain like the mood that it puts them in."
upwave: Tips for mild depression
Can you eat your way to a better mood? You sure can -- and chocolate isn't the only known path to pleasure. Here are some good-mood foods to reach for when you need a boost.
Edible pick-me-ups
: When you've got a case of the 3 p.m. munchies, the last thing you should reach for is a can of soda or bag of candy.
"What you need is protein," says Dr. Marcelle Pick, author of the book "Is it Me or My Hormones?" "Grab almond butter with half an apple, or a cheese stick or some carrots and hummus. Protein keeps blood sugar stable and you'll have sustained energy." The more energy you have, the better your mood.
upwave: How to eat more protein
Bananas: Add a banana to your lunch or your smoothie and you'll get not only a sweet treat, but an extra shot of dopamine. The humble banana contains up to 10 milligrams of dopamine.
"Dopamine is our primary reward chemical," says Kilham. "You know that enormous amount of pleasure you get when standing under a hot shower? You feel that because your body is producing dopamine. So anytime you get extra dopamine, that's going to have a beneficial effect on mind and mood."
Coffee and tea: Have you ever gone from grumpy to glorious in the time it takes you to down your first cup of coffee? Thank the caffeine, a natural mood lifter. "Caffeine is spectacularly good for us," says Kilham. "It enhances mood and improves cognitive function overall."
upwave: Can you OD on caffeine?
Turmeric: This yellow spice, commonly used in East Asian cooking, contains curcumin. "Curcumin demonstrates neuroprotective properties in the brain, enhances mood and there is some evidence it helps against depression," says Kilham.
Purple Berries: Blueberries and blackberries contain purple pigment called anthocyanin, which, aside from being a heart-healthy antioxidant, is also a mood enhancer.
fatty acids: The fats found in salmon, sardines and fish oil supplements contain the fatty acid DHA. Our bodies can't produce their own DHA, and people with low DHA are more prone to depression. "DHA has a beneficial effect on mind and mood and is very active in the brain," says Kilham.
upwave: Is it safe to eat fish while pregnant?
Mood doomers
Yes, there are foods that can bring your mood down as well. Here are some items to keep off your menu and out of your shopping cart.
Sugar: "Whether it's from soda or from cupcakes, we are just consuming too much of it," says Pick. "Fluctuations in blood sugar cause mood swings, lack of energy, inability to lose weight and pre-diabetes." If you want something sweet, reach for a piece of fruit instead. (As stated above, blueberries, because of their anthocyanins, might even give you an added mood boost.)
upwave: How to prevent sugar cravings
Gluten: "If you have inflammation from or a reaction to gluten, it can actually affect brain function and certainly energy," says Pick. It can also affect the adrenal gland, which is responsible for producing the hormone cortisol, which plays a major role in stress response, immunity and the functioning of your nervous system.
Processed foods: Some of the additives in processed foods -- especially artery-clogging trans fats -- put a lot of stress on the body.
"Our bodies haven't adapted to (some) manufactured additives," says Pick. Adds Kilham, "They (can be) nutritionally vapid." In studies, trans fats have been linked to increased irritability and aggression.
"If people would eat an actually nutritious, natural diet, they would notice very significant mood enhancements," observes Kilham.
"A mood-boosting diet isn't about adding large amounts of choice foods to your daily menu. It's not that you (eat) a pound of chocolate once every couple months. It's that you have a little bit of semi-sweet dark chocolate, bananas in your diet on a regular basis, purple berries in your diet on a regular basis, seafood rich in omega-3 fatty acids on a regular basis. These are ongoing investments in your health."
This article was originally published on upwave.com.
© 2013 upwave, All Rights Reserved.
135
Comments »
SHARE THIS
From Around the Web
More from CNN
Recommended by
Amazon
Fast & Furious
New York
Ron Burgundy
More from CNN Video:

Cop accused of affair with suspect

Bride loses her groom and her leg, but not her faith

5 healthy eating tips for holiday travelers
From Around the Web: