to dog or not to dog

a woman who ate bacon every day just turned 105 and the oldest woman in the world at 115 attributes her longevity to pigs feet.  also the discordian religion requires the eating hot dogs, especially on the first friday after illumination.  on the other hand acidic things like oj or vit c neutralize the nitrates in the hotdog or blt and prevent them from turning into nitrosomides. 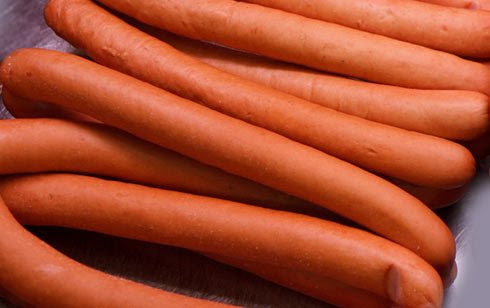 The World Cancer Research Fund (WCRF) has just completed a detailed review of more than 7,000 clinical studies covering links between diet and cancer. Its conclusion is rocking the health world with startling bluntness: Processed meats are too dangerous for human consumption. Consumers should stop buying and eating all processed meat products for the rest of their lives.
Processed meats include bacon, sausage, hot dogs, sandwich meat, packaged ham, pepperoni, salami and virtually all red meat used in frozen prepared meals. They are usually manufactured with a carcinogenic ingredient known as sodium nitrite. This is used as a color fixer by meat companies to turn packaged meats a bright red color so they look fresh. Unfortunately, sodium nitrite also results in the formation of cancer-causing nitrosamines in the human body. And this leads to a sharp increase in cancer risk for those who eat them.
A 2005 University of Hawaii study found that processed meats increase the risk of pancreatic cancer by 67 percent. Another study revealed that every 50 grams of processed meat consumed daily increases the risk of colorectal cancer by 21 percent. These are alarming numbers. Note that these cancer risks do not come from eating fresh, non-processed meats. They only appear in people who regularly consume processed meat products containing sodium nitrite.
Sodium nitrite appears predominantly in red meat products (you won’t find it in chicken or fish products). Here’s a short list of food items to check carefully for sodium nitrite and monosodium glutamate (MSG), another dangerous additive:
If sodium nitrite is so dangerous to humans, why do the FDA and USDA continue to allow this cancer-causing chemical to be used? The answer, of course, is that food industry interests now dominate the actions by U.S. government regulators. The USDA, for example, tried to ban sodium nitrite in the late 1970′s but was overridden by the meat industry.5 It insisted the chemical was safe and accused the USDA of trying to “ban bacon.”
Today, the corporations that dominate American food and agricultural interests hold tremendous influence over the FDA and USDA. Consumers are offered no real protection from dangerous chemicals intentionally added to foods, medicines and personal care products.
You can protect yourself and your family from the dangers of processed meats by following a few simple rules:
And finally, eat more fresh produce with every meal. There is evidence that natural vitamin C found in citrus fruits and exotic berries (like camu camu) helps prevent the formation of cancer-causing nitrosamines, protecting you from the devastating health effects of sodium nitrite in processed meats. The best defense, of course, is to avoid eating processed meats altogether.
For more information about how to prevent cancer you can find also at World Cancer Research Fund’s web page.
source: http://institutefornaturalhealing.com

Homeless Man Turned Millionaire Offers The Best Advice I Ever Got

Chris Gardner (Photo credit: Wikipedia)
I spend 60 hours a week on my business but I don’t work for a minute. Work is hard. But what I do—writing, speaking, researching, learning, and sharing information— is pure joy. It’s what I was called to do. But often what we’re called to do and what we choose to do are different. As an undergraduate student at UCLA I chose to study for the law school entrance exam because it was the accepted path for a political science major. I could have gone to a top law school, but I didn’t love the law. I loved reading inspiring speeches in a publication called Vital Speeches of the Day. I loved watching great broadcast journalists like Peter Jennings. I would analyze how he spoke—the inflections, volume, and pacing. I chose to pursue my calling and enrolled in journalism school. I spent the next twelve years as a broadcast journalist before leaving the industry to leverage my skills in other ways.
“What’s the best advice you ever got?” At the end of a recent podcast interview, the host asked me, “What’s the best advice you ever got?” Before I tell you what I said allow me to rewind to 2007 when I had another career decision to make: hold on to a large, steady paycheck as the vice president of a global PR firm or commit full-time to my growing writing and public speaking business. At the time I was doing some freelance writing and I interviewed the real-life Chris Gardner, the man who actor Will Smithportrayed in the movie, The Pursuit of Happyness (‘happyness’ is purposely misspelled in the title. You’ll have to read the book or watch the movie to find out why). Gardner told me the true story of how he spent nights in the bathroom of a subway station along with his 2-year-old son. In the daytime Gardner would put on his one suit, drop off his kid at daycare and take unpaid classes to become a stockbroker. You can guess how the story ends. Gardner rose to the top of his firm and became a multi-millionaire.
The secret to happiness, in life and in business. I knew the Oakland, California subway station Gardner had slept in because I passed it each day on my train trip into San Francisco. I had plenty of time to contemplate the advice he gave, words that changed the course of my career. “How did you find the strength, the spirit, to keep going?” I asked Gardner. “Carmine, here’s the secret to success: find something you love to do so much, you can’t wait for the sun to rise to do it all over again.”

'Don't Learn to Type,' 'Go Back to College' and Other Career Advice Worth Ignoring

The 7 Success Principles of Steve Jobs

The Case Against Law School

Deborah L. JacobsForbes Staff
Each day when I rode past the station I would think about those words. It forced me to question my choices and the daily trips into the city, which I dreaded. I wasn’t waiting for the sun to shine; I was waiting for it to go down so I could head home. I quit the PR firm, trading the stability of a salary for the instability of a start-up. Last week I was invited to BookExpo America, a prestigious book industry conference in New York, to sign copies of my sixth book. Gardner’s advice had changed my life and my business.
The most inspiring leaders are those who don’t work at a job but pursue a calling. In doing so they inspire the rest of us to be our best selves and to match our skills with our passions. They give us confidence to pursue our dreams. Sometimes those dreams might lead an employee to find another job position in the same company or, in some cases, to leave the company altogether. And that’s okay. If an employee leaves your company and can say that your leadership inspired them to find their true calling, you will be rewarded in far more ways than you can imagine. If anything, you’re more likely to attract the people who really want to be on the bus instead of those who are daydreaming about finding another ride. I’ve also noticed that people who choose to remain with inspiring leaders admire those leaders for caring about their staff personally and professionally. Employees are more likely to stay with inspiring leaders (provided they are in the right roles) and more likely to speak highly of them. Ralph Waldo Emerson once said, “Our chief want is someone who will inspire us to be what we know we could be.” True leaders satisfy our ‘chief want.’
Chris Gardner inspired me to think differently about my own career choices. When I started my business there were many nights when I couldn’t sleep because I didn’t know how we were going to pay the bills. Today I can’t sleep for a different reason—I keep looking out the window and waiting for the sun to rise to do it all over again.
Carmine Gallo is the communications coach for the world’s most admired brands. He is a popular keynote speaker and author of several books, including the international bestsellers The Presentation Secrets of Steve Jobs and The Innovation Secrets of Steve Jobs. His new book,The Apple Experience: Secrets to Building Insanely Great Customer Loyalty is the first book to reveal the secrets behind the stunning success of the Apple Retail Store. Carmine has recently launched an eLearning course titled, The New Rules Of Persuasive Presentations. Follow Carmine on Facebook or Twitter.
Read more:
Billionaires’ Advice For New Grads
The Worst And Best Advice I’ve Ever Gotten
Why There Will Never Be Another Warren Buffett

Most Read on Forbes

Carmine GalloContributor
Follow (577)
+ show more
I am a communications coach for the world’s most admired brands. A former journalist for CNN and CBS, I work directly with the world’s top business leaders to craft compelling messages, tell inspiring stories and share innovative ideas. As a keynote speaker, represented by the BrightSight Group, I have addressed executives at Intel, Cisco, Medtronic, Hewlett Packard, SAP, Pfizer, LinkedIn, Chevron, and other global brands. I am the author of bestselling books such as The Innovation Secrets of Steve Jobs, winner of an Axiom award for one of the best business books of 2011. Now an international bestseller, The Presentation Secrets of Steve Jobs has been translated into 14 languages. My new book, The Power of Foursquare, reveals how businesses leverage new mobile marketing tools to attract, reward and engage customers. I graduated from UCLA and have a master’s degree in journalism from Northwestern. I live in Pleasanton, California, with my wife and two daughters.
The author is a Forbes contributor. The opinions expressed are those of the writer.

Who Just Made a Billion Dollars?

Our Real-Time Billionaires scoreboard tracks the biggest holdings for 50 of the world’s wealthiest people.See who's up & who's down right now »
Posted by Rev. Bren Jacobson at 10:04 AM No comments: