By JENNY HOPE
PUBLISHED: 18:59 EST, 22 January 2014 | UPDATED: 19:01 EST, 22 January 2014
31 shares
4
View
comments
Eating more fish could give you a bigger brain - and greater protection against diseases such as Alzheimer’s, claim researchers.
They found people with higher levels of the omega-3 fatty acids found in fish oil may also have larger brain volumes in old age.
This would be the equivalent to preserving one to two years of brain health, says a new study published in the journal Neurology. 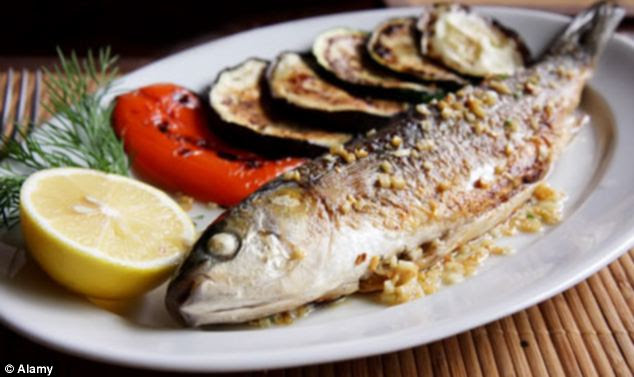 Eating more fish could give you a bigger brain and greater protection against diseases including Alzheimer's
Shrinking brain volume is a sign of Alzheimer’s disease as well as normal aging.
Britons are currently advised to eat fish at least twice a week, including one portion of oily fish.
One of the key omega-3 fatty acids is docosahexaenoic acid (DHA), which is thought to help nerve cells communicate with each other.
The richest source of the nutrient is oily fish, such as herring, mackerel and sardines.

For the US study, levels of omega-3 fatty acids including DHA in red blood cells were tested in 1,111 women who were part of the Women’s Health Initiative Memory Study. Eight years later, when the women were aged around 78, MRI scans were taken to measure their brain volume.
Those with higher levels of omega-3s had larger total brain volumes eight years later.
Those with twice as high levels of fatty acids (7.5 vs. 3.4 per cent) had a 0.7 per cent larger brain volume, with the increase measuring up to two inches (6cm).
Study author James Pottala, of the University of South Dakota in Sioux Falls and Health Diagnostic Laboratory Inc. in Richmond, Virginia, said lower levels of fatty acids were linked to smaller-sized brains.
He said: ‘These higher levels of fatty acids can be achieved through diet and the use of supplements, and the results suggest that the effect on brain volume is the equivalent of delaying the normal loss of brain cells that comes with aging by one to two years.’
Those with higher levels of omega-3s also had a 2.7 per cent larger volume in the hippocampus area, the brain’s key memory centre. 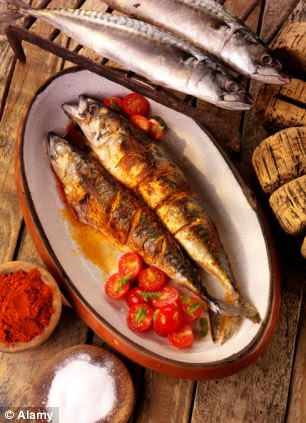 The richest source of the nutrient is oily fish, such as herring, mackerel (pictured) and sardines
In Alzheimer’s disease, the hippocampus begins to shrink even before symptoms appear.
Dr Pottala said: ‘Our study suggests that a higher tissue reserve of omega-3 fatty acids may slow the loss of cognitive function that can accompany brain atrophy.
‘It adds to growing literature suggesting that higher omega-3 tissue levels, which can be achieved by dietary changes, may hold promise for delaying cognitive ageing and/or dementia.’ The best dietary source of omega 3 fatty acids is oily fish because the human body cannot produce omega-3 fatty acids.
White fish is also a healthy food including cod, haddock and plaice although it contains lower levels of essential fatty acids.
Fish oil supplements are recommended as protection against heart attacks and sudden death, with regular fish eaters a third more likely to survive a heart attack.
Omega-3 fats work in several ways to reduce heart attack risk by cutting blood fats, reducing the chances of a blood clot and blocking dangerous heart rhythms that might otherwise prove fatal.
It is thought that omega-3 fatty acids in fish oils may reduce inflammation of the brain and play a part in brain development and nerve cell regeneration.
Dr Laura Phipps of Alzheimer’s Research UK charity, said: ‘There has been mixed evidence as to the benefits of omega-3 fish oils on the brain and whether they may protect against memory decline and dementia.
‘This study suggests that higher levels of omega-3 fatty acids in blood are linked to larger brain size but the possible reasons for this association need further investigation. ‘We know that the brain gets smaller in people with dementia, but it is unclear from the study what effect larger brain size would have on memory and thinking in the volunteers or their long-term risk of developing dementia.
‘The best way to assess whether omega-3 could protect against dementia is through clinical trials and so far, trials of omega-3 supplementation have not shown benefits in protecting against cognitive decline.’ 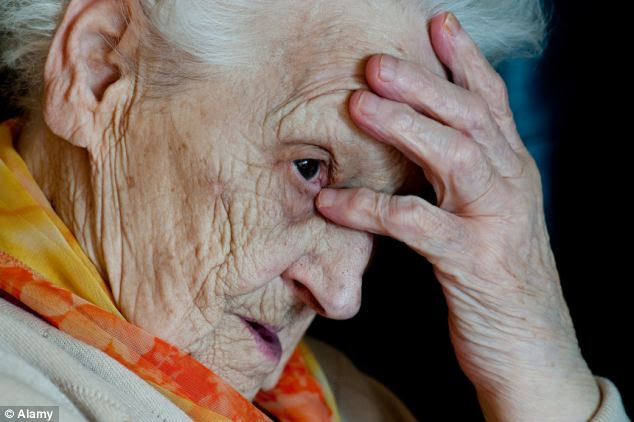 Shrinking brain volume is a sign of Alzheimer's disease as well as normal aging (stock image)
Dr Doug Brown of the Alzheimer’s Society, said: ‘It’s interesting to see that eating more fish could lead to larger brain volume, particularly in the hippocampus - an area of the brain that comes under attack in dementia.
‘We know that brain shrinkage can be linked to dementia and larger brain volumes could indicate a better ability to cope with the ravages of the condition, but it’s a big leap to draw this conclusion.
‘Whilst interesting, this study still leaves us in the dark about what effect eating fish has on the development of dementia.’

chocolate for inflamation and diabets

Diabetes May Be Prevented by Chocolate 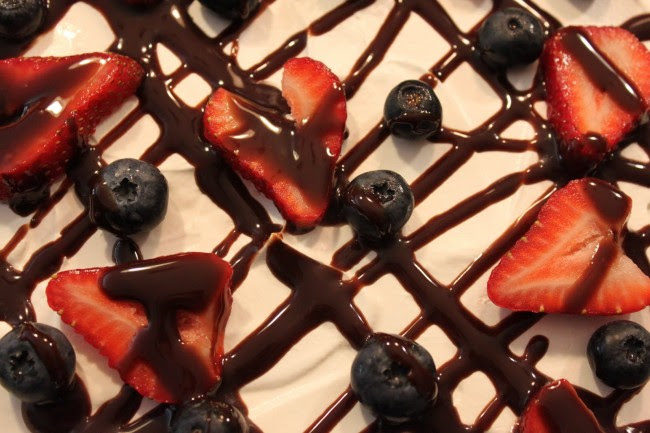 It has been reported today that chocolate may help prevent Type 2 diabetes because it contains flavonoids. These are chemical compounds that aid secondary metabolism, and although not crucial to life, these compounds do strongly assist in long term health maintenance. They are commonly found in fungi, plants, microbes and other animals. These compounds were once even touted as possible extra vitamins to be added to the more common ones such as vitamin A, B-12, C etc.
The flavonoids also exist in berries, teas, and even wine.
The Journal of Nutrition reported the study from the University of East Anglia, and King’s College, in the UK. The English study included 2,000 subjects and found that flavonoids were associated with a reduction in insulin resistance in women. This is perhaps the largest study of the health benefits of chocolate yet.

Type 2 Diabetes, or adult on-set diabetes, is a condition where blood glucose levels have become too high. This can lead to constant thirst and hunger, and frequent urination. Ultimately it can lead to heart disease, and even kidney failure. It is typically treated with exercise and diet change, and if the condition worsens, insulin injections can become necessary.
Type 1 diabetes is caused by a lack of key cells in the pancreas and is typically present from birth.
The latest study looked at specific sub-groups of flavonoids, namely flavones, and anthocyanins. The flavones are found in thyme, parsley, celery and other vegetables and herbs. The anthocyanins are found in red and blue colored fruits, such as grapes, and are even found in wine after the fermentation process. The flavonoids sub-groups ability to modulate blood glucose levels, is what leads to the claim that chocolate may help control type 2 diabetes.

A second potentially beneficial effect of these bioactive compounds is that may also help reduce inflammation that is associated with a number of other diseases. Cancer, cardiovascular disease, obesity and diabetes are all associated with painful inflammation of the body.
The clear leaders in beneficial effects from the 2,000 person sample group, were the anthocyanins. Those who regularly ate these foods had the fewest issues with chronic inflammation and the best overall metabolic health.
The study took blood samples and look for biological markers associated with both diabetes and chronic inflammation.
How much of these compounds are needed to have a beneficial effect is yet to be determined. Wine and chocolate are considered by some to unhealthy foods, but establishing what level of consumption would provide a helpful dose of anthocyanins is still needed to be done.
The current study was done with the support of healthy women who are part of the TwinsUK network, an organization that maintains a registry of 12,000 twins in the UK, who are prepared to help in medical studies. The organisation is hoping to study the effect of environment and lifestyle on common diseases through the comparison of twin lifestyles and health profiles.
When further, fully randomized, testing is done, some people may be lucky enough to be in the wine and chocolate group. Although obesity is potentially a cause of Type 2 diabetes, it may be useful for many people to know that chocolate can help regulate their condition.
By Andrew Willig
Sources:
Newsmax
Science Recorder
UEA

Smoking Is Deadlier than Previously ...

2 Responses to Diabetes May Be Prevented by Chocolate

We will read your comment immediately so leave a remark!

Posted by Rev. Bren Jacobson at 8:37 PM No comments: