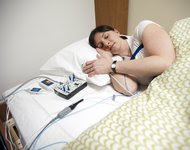 A student demonstrating equipment at Colleen Carney’s sleep lab at Ryerson University. Dr. Carney is the lead author of a new report about the effects of insomnia treatment on depression.

The new report affirms the results of a smaller pilot study, giving scientists confidence that the effects of the insomnia treatment are real. If the figures continue to hold up, the advance will be the most significant in the treatment of depression since the introduction of Prozac in 1987.
Depression is the most common mental disorder, affecting some 18 million Americans in any given year, according to government figures, and more than half of them also have insomnia.
Experts familiar with the new report said that the results were plausible and that if supported by other studies, they should lead to major changes in treatment.
“It would be an absolute boon to the field,” said Dr. Nada L. Stotland, professor of psychiatry at in Chicago, who was not connected with the latest research.
“It makes good common sense clinically,” she continued. “If you have a depression, you’re often awake all night, it’s extremely lonely, it’s dark, you’re aware every moment that the world around you is sleeping, every concern you have is magnified.”
The study is the first of four on sleep and depression nearing completion, all financed by the National Institute of Mental Health. They are evaluating a type of talk therapy for insomnia that is cheap, relatively brief and usually effective, but not currently a part of standard treatment.
The new report, from a team at Ryerson University in , found that 87 percent of patients who resolved their insomnia in four biweekly talk therapy sessions also saw their depression symptoms dissolve after eight weeks of treatment, either with an antidepressant drug or a placebo pill — almost twice the rate of those who could not shake their insomnia. Those numbers are in line with a previous pilot study of insomnia treatment at Stanford.
In an interview, the report’s lead author, Colleen E. Carney, said, “The way this story is unfolding, I think we need to start augmenting standard depression treatment with therapy focused on insomnia.”
Dr. Carney acknowledged that the study was small — just 66 patients — and said a clearer picture should emerge as the other teams of scientists released their results. Those studies are being done at Stanford, Duke and the  and include about 70 subjects each. Dr. Carney will present her data on Saturday at a convention of the, in Nashville.
Doctors have known for years that sleep problems are intertwined with mood disorders. But only recently have they begun to investigate the effects of treating both at the same time. Antidepressant drugs like Prozac help many people, as does talk therapy, but in rigorous studies the treatments, administered individually, only slightly outperform placebo pills. Used together the treatments produce a cure rate — full recovery — for about 40 percent of patients.
Adding insomnia therapy, however, to an antidepressant would sharply lift the cure rate, Dr. Carney’s data suggests, as do the findings from the Stanford pilot study, which included 30 people.
Doctors have long considered poor sleep to be a symptom of depression that would clear up with treatments, said Rachel Manber, a professor in the psychiatry and behavioral sciences department at Stanford, whose 2008 pilot trial of insomnia therapy provided the rationale for larger studies. “But we now know that’s not the case,” she said. “The relationship is bidirectional — that insomnia can precede the depression.”
Full-blown insomnia is more serious than the sleep problems most people occasionally have. To qualify for a diagnosis, people must have endured at least a month of chronic sleep loss that has caused problems at work, at home or in important relationships. Several studies now suggest that developing insomnia doubles a person’s risk of later becoming depressed — the sleep problem preceding the mood disorder, rather than the other way around.
NEXT PAGE »

A version of this article appears in print on November 19, 2013, on page A1 of the New York edition with the headline: Sleep Therapy Seen as an Aid For Depression.

Get Free E-mail Alerts on These Topics

Doris Lessing, Author Who Swept Aside Convention, Is Dead at 94

A Pain That’s Hard to Discuss

BMI Calculator
What’s your score? »
Log in to discover more articles
based on what you‘ve read.
What’s This? | Don’t Show