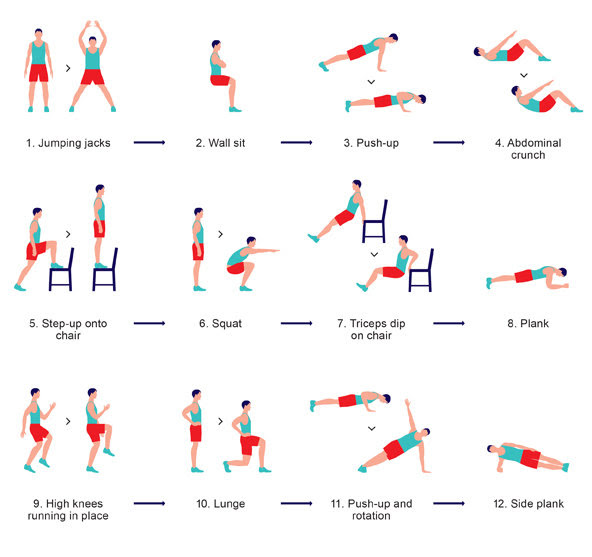 Ben Wiseman
This column appears in the May 12 issue of The New York Times Magazine.
Exercise science is a fine and intellectually fascinating thing. But sometimes you just want someone to lay out guidelines for how to put the newest fitness research into practice.
An article in the May-June issue of the American College of Sports Medicine’s Health & Fitness Journal does just that. In 12 exercises deploying only body weight, a chair and a wall, it fulfills the latest mandates for high-intensity effort, which essentially combines a long run and a visit to the weight room into about seven minutes of steady discomfort — all of it based on science.
“There’s very good evidence” that high-intensity interval training provides “many of the fitness benefits of prolonged endurance training but in much less time,” says Chris Jordan, the director of exercise physiology at the Human Performance Institute in Orlando, Fla., and co-author of the new article.
Work by scientists at McMaster University in Hamilton, Ontario, and other institutions shows, for instance, that even a few minutes of training at an intensity approaching your maximum capacity produces molecular changes within muscles comparable to those of several hours of running or bike riding.
Interval training, though, requires intervals; the extremely intense activity must be intermingled with brief periods of recovery. In the program outlined by Mr. Jordan and his colleagues, this recovery is provided in part by a 10-second rest between exercises. But even more, he says, it’s accomplished by alternating an exercise that emphasizes the large muscles in the upper body with those in the lower body. During the intermezzo, the unexercised muscles have a moment to, metaphorically, catch their breath, which makes the order of the exercises important.
The exercises should be performed in rapid succession, allowing 30 seconds for each, while, throughout, the intensity hovers at about an 8 on a discomfort scale of 1 to 10, Mr. Jordan says. Those seven minutes should be, in a word, unpleasant. The upside is, after seven minutes, you’re done.

A version of this article appeared in print on 05/12/2013, on page MM20 of the NewYork edition with the headline: The Scientific 7-Minute Workout.

Your health questions answered by Times journalists and experts.

What’s in Your Green Tea?:

Marathon, half-marathon, 10k and 5K training plans to get you race ready.

How much do you know about the amazing things that go on in your gut?

Test your knowledge of flu facts and trivia.

When your need to know is right now.